HIDDEN BEHIND TREES, WOODLANDS AND AN ANCIENT GARDEN WALL, AN ALMOST FORGOTTON WORLD SURVIVES WITHIN AN ATMOSPHERE THAT IS DESCRIBED AS “QUITE MAGICAL.”

Rownhams House is a Georgian Country House, situated in 12 acres of gardens and woodland with its own magical lake, Gothic style coach house and Grade II listed ice house. With good access to the M27/ M3 motorways ( 45 mins from the M25) Rownhams is conveniently situated for: London and the South, including Winchester, Southampton, Romsey, New Forest, the South coast and the surrounding Hampshire villages. It has plenty of private parking ideal for vehicles, caterers and trucks.

Hidden behind trees, woodlands and an ancient garden wall, an almost forgotten world survives within an atmosphere that has been described as “quite magical”. Rownhams House is managed by its owners who are passionate about the place. The warm, old fashioned friendliness has gained the house very many friends over the years. All this, added to an extraordinary ten thousand years of history, makes Rownhams House genuinely unique in Hampshire.

The Drawing Room, with its ornate plaster work, can be opened, by way of massive bi-folding doors, to include the spectacular Grand Library to create a very large and well proportioned room. The light flooded space has south facing windows overlooking the gardens. The Grand Library, with its mahogany glass fronted book cases was installed by Lord Abinger shortly before the 1st World War. It is said to have once held Percy and Mary Shelley’s papers (including the original manuscript of Frankenstein) before they were donated to the Bodleian Library at Oxford University. The magnificent staircase gives way to a domed light well, which leads to a number of rooms retaining many original features including fire places and ceiling roses. The house has the added bonus of a sizeable cellar that runs under the property and which incorporates two vaulted wine cellars and is a space full of character and charm.

The Coach House is also a Listed building but its origins are lost in the mists of time. The building appears to be a much altered medieval barn and features old oak beams, leaded light windows and wonderful views across the lawns towards the lake. The Knights room still purveys an air of bygone times. Taking you back to when the Knights of St John would have held council at Rownhams. The exposed rustic beams, throughout the building, but especially on the second floor, remind you of it’s humble beginnings. The large Harvest room provides space to admire the views and observe the wealth of wildlife including deer, fox cubs, buzzards and even badgers.

The current Gardens are laid out in the 19th century Romantic style with a lake, wide terraced lawns, glasshouse, orchard, wild flower meadow and woodland paths. The garden contains many rare trees, plant specimens and is the home to some fabulous wildlife. Plus the listed and very rare ice house.

Rownhams House & Gardens is now available to hire for your exclusive use and provides the perfect setting for all manner of business or social occasions; large or small.

Above all, we want Rownhams House to be filled with love, laughter and fun and hope you find it as magical a place to be as we do.

Although the Rownhams House lands form part of the manor of North Baddesley it seems likely that in Saxon times we were part of Nursling which was held by the Bishop of Winchester. During the Dark Ages St Boniface studied at Nursling monastery. But at some time before 1180 we appear to have changed hands.

By then the land and whatever farm buildings were on site, were held by the Lords of the Manor of North Baddesley. For much of the medieval period these were the Mortemers, a family who came over with William of Normandy. From that time they played an influential role in the history of England and frequently accompanied kings on their military campaigns. One of the Mortemer’s however was hung drawn and quartered for his part in the gruesome murder of Kind Edward II. As for the Knight’s Hospitalers, who held the land from the Mortemers, two of the Commanders of the Baddesley Preceptory were beheaded for declining to recognise Henry VIII as head of the church.

In 1338 there is a record of a farm of 80 acres with a ruined dwelling which was held by the Knights Hospitaler of St John of Jerusalem. At this time the valuation records the annual rental of the estate as 12d or 5p!

According to an old document by the middle of the 18th Century the estate consisted of two dwellings with a barn, back side garden and two cherry orchards thereunto belonging and the several pieces or parcels of Arable Meadow & Coppice Land.

In 1762 the estate was bought by a Mr Robert Barton for £1,000. He was the great nephew of Isaac Newton and nephew of Catherine Barton. Catherine was very well known in London during the 1720s; was acquainted with Sir Edmund Halley (of comet fame), Jonathan Swift, Dryden, William Hogarth and Voltaire. Robert Barton was a merchant with the Levant Company and had become British Consul in Cairo. He had married Delitia Brydges a 15 year old widow in Cyprus. He returned to England after 1749 when he had been turned out of his house by the Mameluke governor of Cairo who had tried to extort money from him by threats of violence.

During May 1762 Robert had written to his brother, “…I propose myself of having a little place I can call my own & Delitia’s…” The Lord of the Manor at this time was John Chute (of the Vyne) who was a friend and companion of Horace Walpole. Robert then built the main house. The dating of the adjoining Coach House has been difficult but it certainly appears to have medieval origins.

Oliver Colt died in 1845 and was succeeded by his son Major William Oliver Colt. He married a lady called Jane Eyre. Between them – and the tale is contradictory in parts – they built St John’s Church in Rownhams.

During Victorian times the grounds were frequently used for village cricket matches and school treats.

From 1903 to 1911 the property was acquired by an American couple, Charles and Ruth Farnham. Charles died at the age of 36 in Paris and his wife. Ruth sold the house in 1911 and a few years later was highly decorated for her humanitarian work in Serbia during World War One. She later became Baroness de Luze.

The 5th Lord Abinger was the next owner. He served during WW1 and lent his steam yacht to the Royal Navy. During this period the house was used to care for wounded troops. He died in 1917 when the house was bought by Horace Hanbury, son of Sir Thomas Hanbury who was described as a ‘Shanghai merchant and botanist. Sir Thomas founded La Mortella Botanical Garden in Italy.

In 1926 the house was bought by the Winstanley family whose property and lands in Leicester had been subject to a ferocious ‘compulsory purchase order’. Richard and Kathleen Winstanley had six children and a staff of sixteen. They had a pet monkey called Lil Twee Creuk, who threw flowerpots at the head gardener who habitually wore a top hat. Lil’s gravestone is still to be seen in the garden.

The property passed to the Barber family in 1954. John Barber, as well as running Victory Transport was also a director, and ultimately chairman, of Southampton Football Club. In the late 1950s a field – now somewhere under Betteridge Drive – was levelled and turned into a football pitch complete with floodlighting. It was used by several local football teams as well as a practice ground for the Saints. Two lucky householders must now own the penalty spots from which at least two England players practiced their penalty kicks! The Grand Library was also the room in which the purchase of centre half Tony Knapp was negotiated. The transfer fee was five times the amount John Barber had paid for Rownhams House and 26 acres about 7 years earlier.

From 1954 Rownhams House was the headquarters of Victory Transport Ltd. From here a fleet of orange lorries delivered a staggering variety of goods to destinations throughout the UK – anything from dog biscuits to giraffes. From the late 1960s it became the home of Greenwoods Transport until the early 1980s when Heronfreight Ltd arrived.

In 2013, the house was purchased and still remains in the private ownership of the Owens & Fishlock family. Helen was born in Southampton and lived previously in Rownhams for many years, where her parents still live today. The purchase of Rownhams House marks a significant return to Southampton for both Helen and Nigel, after many years away from the south coast. Nigel’s Grand Father Lord Owens captained the maiden journey of the Oriana from Southampton to Australia. 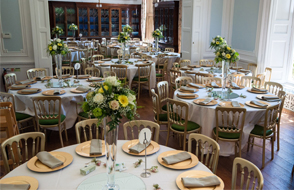 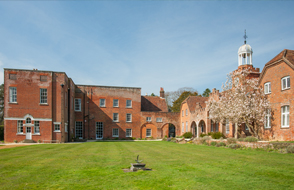 From business meetings, away days or conferences to family occasions like a birthday party, anniversary, christening or wake.